The league is divided into a north division and a south division. For Super Saturday, the two divisions matched up with teams of same ranking to play. Spearville, with a 2-3 record, played South Central, who also had a 2-3 record.

This proved to be an equally matched game. The score at half was 0-0, but South Central came out in the second half and scored twice. The final score was 16-0 in favor of the Timberwolves.  At the conclusion of the game each team was awarded medals for their efforts this season.

The fifth and sixth grade team. 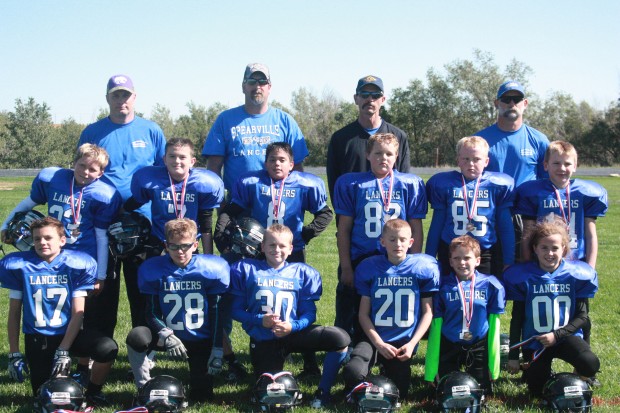 The third and fourth grade team.

The final regular season tackle football games were played Saturday, Oct. 5, at Lancer field against the Coyotes from Kinsley. These teams have worked hard all season and have improved each and every week. They are sponsored by Kansas City Power and Light, Roto-Mix, and Right Co-op.

The third and fourth grade team played first. They took an early lead and kept going winning by a final score of 34-18. This brought their record to 2-3 for the season. They will play their Super Saturday tournament Oct. 12 in Jetmore. Kick-off will be at noon against the South Central Timberwolves.

The fifth and sixth grade team had an exciting game. The score was tied 16-16 at halftime. The second half went back and forth with it being tied 22-22 with 3 minutes to go. Spearville scored making the score 28-22, but failed to convert the 2-point conversion. Kinsley took over and ran down the field to a quick touchdown and 2-point conversion, making the score 28-30 in favor of the coyotes. Spearville wasn’t finished, however, and went back down the field scoring the winning touchdown with only seconds left in the game.

In volleyball action, all of our youth teams played in Dodge again this week. We had an even win-loss record overall—Spearville fourth and sixth graders came out on top, while the third and fifth graders had some tough luck. The girls continue to practice hard and have fun.

In non-competitive action, our flag football teams and K-2 volleyball team also played this weekend. They are continuing to improve their skill level for the coming years.

The Spearville Lancer football team ran into some bad luck Saturday, Sept. 21 as they traveled to Greensburg to take on the Kiowa County Mavericks.  The third and fourth grade team lost 6-0, putting up a great defensive battle. The fifth and sixth graders lost 40-6.

Next week will be the final away game for the Lancers as they travel to Montezuma to take on the South Gray Rebels.

Here’s a couple of newspaper articles about the team!

Flag football opened play Saturday at the Dodge City YMCA. Spearville has two teams of combined kindergarten through second graders. The Spearville Thunder is coached by Brad Ackerman and Bill Hornung  and the Spearville Lightning is coached by Scott Werner and Steve Sites.

Official scoring is not kept in this league, but all indications were that our boys played well and had a great deal of fun!